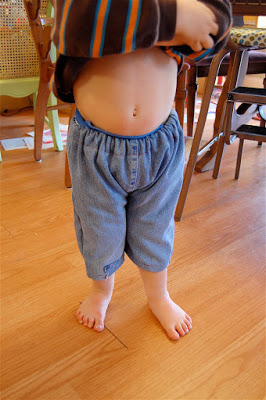 I had the brilliant idea of making Liam some new pants this morning. Several pairs of his pants won’t snap shut anymore and I figured an elastic waistband would be the solution. I just happened to have a pattern for toddler pants in a cool book called Simple Sewing for Baby by Lotta Janesdotter. I didn’t have a problem following the pattern, but I don’t think it was quite made for Liam’s size.

I realized as I was sewing that they were going to end up looking more like capris than full-length pants. When I finally tried them on him though, they didn’t make it up all the way over his bum either. 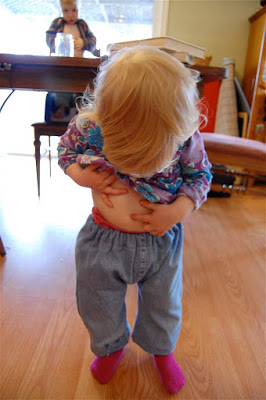 The good news is that it only took me (most of) the morning to put these together and I didn’t really waste any material since I used an old pair of my jeans to make them. They also ended up fitting relatively okay on Eleanor. They’re not at all fashionable, but will do for getting dirty. 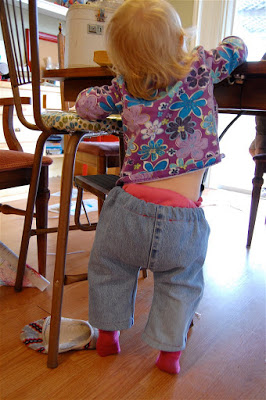 And of course Skyler (my 6-year-old) was the one to fall outside and rip a hole in his perfectly good corduroys while I was busy sewing. Another day in the life of mamahood!